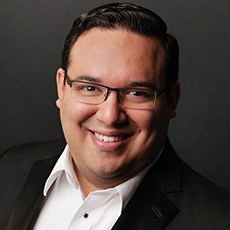 Since 2020, Marco Melendez has served as the Director of Music of St. Maria Goretti Catholic Church and School. In this position, he oversees SMG's Music Ministries at the parish and the Music Education program at the school.

As a conductor, educator, and sacred musician, Mr. Melendez has led choirs, taught seminars, and has been a guest artist for churches and music programs throughout the country. At only fifteen years of age, he was named the music director of the San Angelo Singing Boys of San Angelo, Texas. Two years later, he was named music director of a small church in West Texas. Since then, Mr. Melendez has founded several choral programs throughout the country as well as a Vocal Music Institute for young singers. He has been music director of churches throughout Texas, Wisconsin, Pennsylvania, New Jersey, and California and has taken one of his former church choir’s tour to New York City where they performed in Carnegie Hall with world renowned composer/conductor John Rutter. In 2014, Melendez returned to Carnegie Hall to make his own New York City conducting debut.

As Artistic Director of Milwaukee Children’s Choir, Mr. Melendez prepared his choirs for performances with the Milwaukee Symphony Orchestra, the Milwaukee Ballet, American Boychoir, and many others. He led Milwaukee Children’s Choir (MCC) on concert tours throughout the nation, on a performance tour to the Bahamas, and in a collaborative concert with Rock and Roll Hall of Famer’s THE FOUR TOPS. With MCC, he founded the Milwaukee Choral Conference, a program designed to provide conversations between school, religious, and community chorus leaders to explore solutions for promoting and preserving the choral arts of today, as well as future generations. During his tenure at MCC, the organization went from affecting the lives 450 students to 1,500 students throughout the Greater Milwaukee area. While in Milwaukee, Melendez also served as Adjunct Associate Professor of Music at the Peck School of the Arts at the University of Wisconsin-Milwaukee.

Mr. Melendez has served as the clinician of several choral festivals and honor choirs throughout the nation. He has also led workshops at the State Convention of the Wisconsin Choral Directors Association and at the North Central Division of the American Choral Directors Association (ACDA) Convention. Recognized as a leader in the field of the adolescent male’s expanding voice, Melendez also served as the Repertoire and Standards Chair for Boychoirs in the North Central Division of ACDA.

Mr. Melendez received a bachelor of music in sacred music from Westminster Choir College of Rider University and a master of music in vocal pedagogy from Holy Names University.