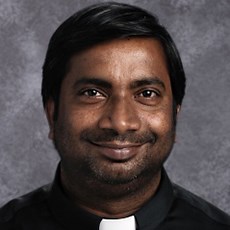 Fr. Anthony Thirumalareddy (Fr. Tony) was appointed Parochial Vicar at St. Maria Goretti on July 14, 2018. He was ordained to the priesthood on April 17, 2008, in the Diocese of Warangal, India.

He was born in Balanagar, a small village in Karimnagar, India. Balanagar is a Catholic village, where about 100 families live together in community and agriculture is their main source of income.

He grew up in Karimnagar, India and attended Loyola High School and College, which was opened by the Society of Jesus in 1980. He earned a bachelor's degree in Education from Ekashila Junior College in Warangal, India.

Fr. Tony entered the seminary in 1998 and spent 10 years in priestly formation. He completed his Philosophy degree at St. John's Regional Seminary in Vizag, India and his Theology studies in Hyderabad, India.

During his fifth year of seminary, he had the opportunity to visit St. Mother Theresa’s tomb in Kolkata. While he was there, he recalls one of the sisters spoke to him and in that moment he was certain of his vocation to the priesthood.

In 2014, he was assigned as Pastor at Lourdu Matha Parish in Karimnagara, India. While he served that parish, he completely renovated the church and beautified the sanctuary. He finished the project right before moving to Madison.

Since coming to St. Maria Goretti, he has always felt right at home and feels blessed to be part of the SMG family.