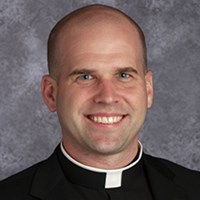 He has a bachelor's degree in Biomedical Engineering from Marquette University in Milwaukee. He attended seminary at the American College of Leuven in Belgium and the Pontifical North American College in Rome.

Following his ordination to the priesthood, he served as Parochial Vicar at St. Cecilia Catholic Church in Wisconsin Dells.

Later, he was appointed Parochial Administrator at the linked parishes of Holy Family in La Valle, St. Boniface in Lime Ridge, and St. Patrick in Loreto. While serving those parishes, Fr. Scott initiated and oversaw the interior demolition and renovation of the entire parish rectory, along with a new landscaping plan of the grounds. The parish's sacramental records were updated and the finances were rectified.

Fr. Scott also served as Parochial Vicar at Sacred Heart Catholic Church in Reedsburg. Following his time there, he returned in Rome to continue his graduate studies in Canon Law at the Pontifical University of the Holy Cross.

In 2018, he served as the Priest Secretary and Master of Ceremonies to Bishop Morlino before his passing in November 2018. He currently serves as a Judge on the Tribunal for the Diocese of Madison. St. Maria Goretti is Fr. Scott's sixth priestly assignment in five years.